your 5 most identifiable things of the HS hockey tournament?

Older Topics, Not the current discussion

still got the entire game on tape
believe in the hockey gods...
Top 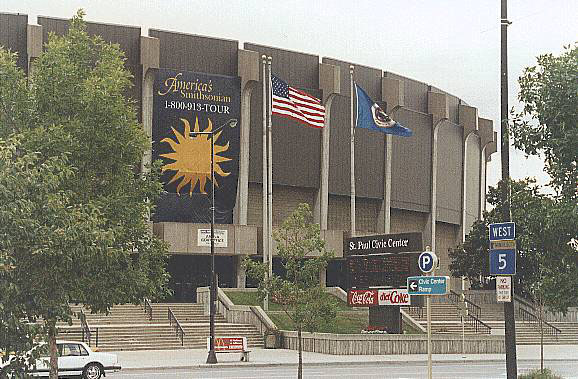 Here is the original most identifiable.

Can't forget the old Met Center where the tournament was played for a few years.
Top

nothing beat playing with the clear plexiglass boards at the old civic center...i remember skating onto the ice for the first time thinking of all the other players who go to dot he same thing...butman, those clear boars were the best, ans so cool to play in.
Top

Clear boards in Civic Center.
How high the seats went in the far end of the CC when coming out of the tunnel from the locker rooms.
The announcers voice when calling your name.
How big a TV camera is when it's 3 feet from your face and you don't know whether to smile or look away.
Hitting the pipe in the first game of the tourney and realizing close doesn't count. Terrible feeling.
Top

The lights going out in the 1986 tournament

North vs. South - of course almost everyone cheers for the North (i.e. Warroad vs. Burnsville or something like that)

The clear boards on the original building

one shot shotty wrote:06 rapids over hill
then riedar chokes

07 rapids over century
then riedar chokes

but the 06 game over hill was intense hockey and crowds

Eh? Rapids never beat RC, nor would they have if they actually played...Century beat Hill.

That game was UNFORGETTABLE. The state tournament is just a magical place, every part of it. Even Section 206 helping us on the "PUBLIC SCHOOLS" chant, though they would turn against RC in the Roseau game, Section 206 is awesome.
Century Hockey
Top

That queasy feeling before you hit the ice

The clear boards..darn things were hard to pick the puck up off of

And the Grand Rapids Cheerleaders especially the blond with the headdress on....

4. Hotels and drinking beers with buddies

THE XCEL WINGS!!!! And watching my hometown tewam win it last year! yep u guessed it im from roseau and last year was my first state tourney............but seriously the wings are amazing
Top

5 - The old St Paul Civic Center
4 - Clear Boards
3 - Seeing the old boys come watch the games (65 plus years old)
2 - Seeing good friends every year and talking hockey.
1 - The original I Tier System when you could watch the Big School vs Small School match-up's and the entire small town would be at the game. Awesome school spirit!! Great Hockey atmosphere!!

It will never be that good again.
Top

5. Sitting on the Glass during single A games
4. $5 indivual pizzas
3. Sitting in the Greenway fan section with their entire town when I'm from monticello
2. Playing quarters and making a killing
1.All the good looking women
Top

(Prices as I can remember)

Why the hell is all food at the Xcel so damn expensive? $4 popcorn??? Lets get serious here...
Top

(Prices as I can remember)

Why the hell is all food at the Xcel so damn expensive? $4 popcorn??? Lets get serious here...

People will pay. That's why.